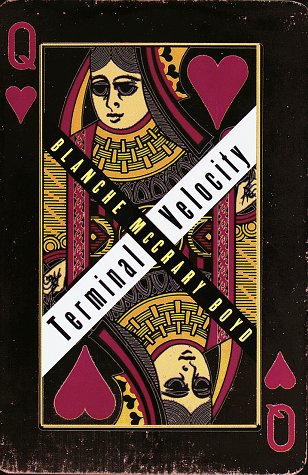 A rollicking, kaleidoscopic trip through the drug-tinged lesbian-feminist counter-culture of the 1970s, Boyd's second novel (after The Revolution of Little Girls) opens as two FBI agents arrive at a ""radical lesbian commune"" in California, the Red Moon Rising, in the midst of a musical production of Alice in Wonderland. Through a psilocybin haze, Boyd's protagonist and narrator, the self-styled Rain, once a mild-mannered, married junior book editor in Boston named Ellen Burns Sommers, recognizes her lover, Jordan Wallace, in the photo the agents are passing around of two hippies wanted for their participation in the bombing of a Honolulu bank. Soon Rain and Jordan are on the run, living motel-to-motel in a blur of alcohol, painkillers, disguises and pseudonyms--an odyssey that ends in a nervous breakdown, hospitalization and electroshock treatment for Rain and prison for Jordan. Ellen finally lands on her feet, after a stint in AA and after learning to skydive. The pattern of lives adrift, drug abuse and mental collapse that sets the tone for Boyd's most recent novel is more sharply focused here as Rain tells her tale in a wry and detached voice that attains considerable raw narrative velocity. As Ellen tumbles down a rabbit hole of sexual and political radicalism, the book shifts into third-person, reflecting her growing mental dislocation. This study of the political rage, confusion and idealism of the 1970s will also strike a chord with an audience too young to remember that decade. (June)
close
Details