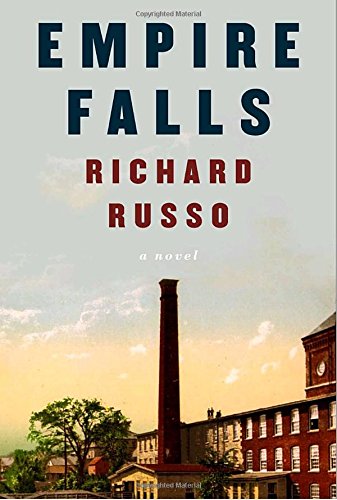 In his biggest, boldest novel yet, the much-acclaimed author of and subjects a full cross-section of a crumbling Maine mill town to piercing, compassionate scrutiny, capturing misfits, malefactors and misguided honest citizens alike in the steady beam of his prose. Wealthy, controlling matriarch Francine Whiting lives in an incongruous Spanish-style mansion across the river from smalltown Empire Falls, dominated by a long-vacant textile mill and shirt factory, once the center of her husband's family's thriving manufacturing dominion. In his early 40s, passive good guy Miles Roby, the son of Francine's husband's long-dead mistress, seems helpless to escape his virtual enslavement as longtime proprietor of the Whiting-owned Empire Grill, the town's most popular eatery, which Francine has promised to leave him when she dies. Miles's wife, Janine, is divorcing him and has taken up with an aging health club entrepreneur. In her senior year in high school, their creative but lonely daughter, Tick, is preoccupied by her parents' foibles and harassed by the bullying son of the town's sleazy cop—who, like everyone else, is a puppet of the domineering Francine. Struggling to make some sense of her life, Tick tries to befriend a boy with a history of parental abuse. To further complicate things, Miles's brother, David, is suspected of dealing marijuana, and their rascally, alcoholic father is a constant annoyance. Miles and David's secret plan to open a competing restaurant runs afoul of Francine just as tragedy erupts at the high school. Even the minor members of Russo's large cast are fully fleshed, and forays into the past lend the narrative an extra depth and resonance. When it comes to evoking the cherished hopes and dreams of ordinary people, Russo is unsurpassed.