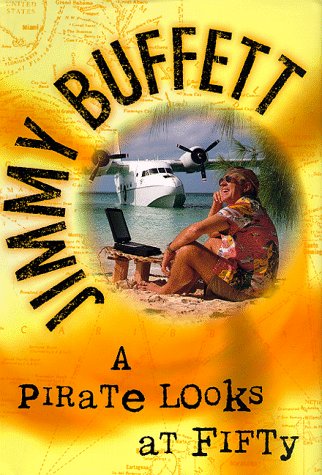 A Pirate Looks at Fifty

The breezy pop craftsman of ""Margaritaville"" and ""Cheeseburger in Paradise"" famously spends most of his time sailing, trotting out 1970s chestnuts on the summer tour circuit--and writing. Buffett's bestselling Tales from Margaritaville (1989) and Where Is Joe Merchant? (1992), among other books, created a world of sun-baked characters whose doings bore some resemblance to those of their author. This memoir draws back the curtain between fact and fiction, and genially takes stock in a manner likely to appeal to the Me generation. Though he rambles, repeats himself and may even raise hackles (""I have been too warped by Catholicism not to be cynical""), Buffett is earnest and unapologetic in his hedonism, seeing his mock pirate's life as the antithesis of the conformity foisted on him as a child in Alabama. In a series of loosely chronological vignettes, Buffett quickly takes us from his bar-band beginnings to a brush with death when he crashes one of his fleet of seaplanes. A lower-latitude voyage with his family (in a newer, bigger plane) to celebrate his 50th birthday makes up the bulk of the book, and takes them from Florida to the Cayman Islands, Costa Rica, Colombia and the Amazon. The diaristic logbook that Buffett keeps along the way provides endless opportunities to muse on the music business; his older, wilder ways; navigation and, on the horizon, approaching mortality. Buffett's prose won't itself win him more ""parrotheads"" (as his fans are called), but those with enough patience or reverence to wade through long descriptions of beloved gear, favorite books or ""fucking tikki pukki drinks"" will find beneath these amblings a disarmingly direct character. Simultaneous audio, CD and large-print edition; author tour. (July)
close
Details