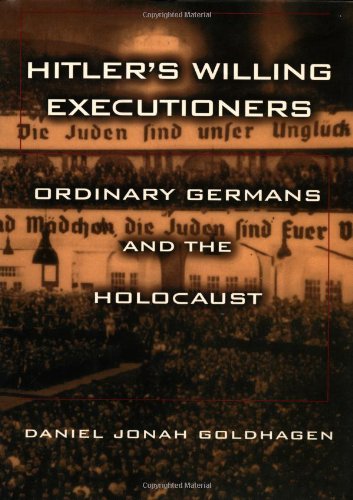 Goldhagen's gripping and shocking landmark study transforms our understanding of the Holocaust. Refuting the widespread notion that those who carried out the genocide of Jews were primarily SS men or Nazi party members, he demonstrates that the perpetrators--those who staffed and oversaw the concentration camps, slave labor camps, genocidal army units, police battalions, ghettos, death marches--were, for the most part, ordinary German men and women: merchants, civil servants, academics, farmers, students, managers, skilled and unskilled workers. Rejecting the conventional view that the killers were slavishly carrying out orders under coercion, Goldhagen, assistant professor of government at Harvard, uses hitherto untapped primary sources, including the testimonies of the perpetrators themselves, to show that they killed Jews willingly, approvingly, even zealously. Hitler's genocidal program of a ""Final Solution"" found ready accomplices in these ordinary Germans who, as Goldhagen persuasively argues, had absorbed a virulent, ""eliminationist"" anti-Semitism, prevalent as far back as the 18th century, which demonized the Jews and called for their expulsion or physical annihilation. Furthermore, his research reveals that a large proportion of the killers were told by their commanders that they could disobey orders to kill, without fear of retribution--yet they slaughtered Jews anyway. By his careful estimate, hundreds of thousands of Germans were directly involved in the mass murder, and millions more knew of the ongoing genocide. Among the 30 photographs are snapshots taken by the murderers of themselves and their victims. (Mar.)
close
Details