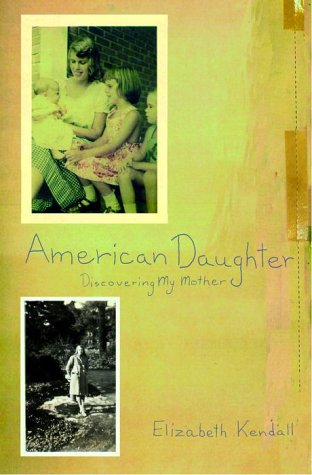 The oldest of six children, Kendall was so close to her mother that she could say: ""We confused each other about where one of us started and the other ended."" This extraordinary emotional bond was abruptly severed in 1969, when her mother was killed in an automobile accident. Kendall, the driver, and her younger siblings survived. Spurred by her own aging and an anguished love affair some 20 years later to come to terms with the guilt and grief that have dogged her since the accident, the dance critic and historian (Where She Danced) began this beautifully realized memoir. The story of her parents' courtship and marriage takes place in St. Louis, from the 1940s through the 1960s, where both parents were members of socially prominent families. Based on her mother's diaries and interviews with family and friends, Kendall re-creates what was, to her, an oddly flawed relationship. Country club wife, caring mother and respectful daughter, her mother sought to find a self apart from her marriage as a social activist. Her father, unsuccessful at starting his own business, had to rely on family connections to find work. Unlike his serious-minded, socially conscious wife, Kendall's father was sardonic and temperamental, finding refuge from his family in his solitary hobby of falconry. With affecting honesty, she describes the birth of her younger sister, Faith, and her mother's intense grief when the brain-damaged child was institutionalized. Kendall's portrait of her mother is both a loving tribute to a woman who transcended the stereotypical role of housewife as well as a fascinating record of a mid-20th-century American woman's life. Agent, Amanda Urban, ICM. (May)
close
Details