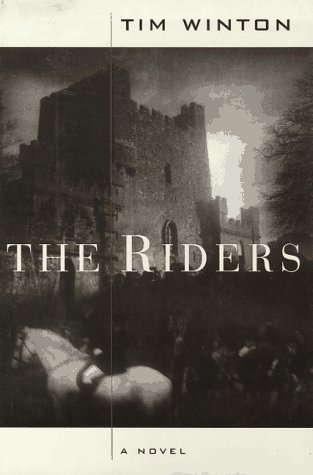 Elements of a psychological suspense thriller and a gut-wrenching love story blend into this irresistible narrative, Winston's 13th novel, written in supple, lyrically charged prose. Australian expatriate Scully is a working-class bloke with a ``wonky eye... Brillopad hair'' and a ``severely used face.'' All the more wonder that beautiful, upper-middle-class Jennifer married him eight years ago. The adoring Scully has since followed her every whim, trailing along with her and their seven-year-old daughter, Billie, across Europe. Jennifer decided they must buy the tiny, dilapidated cottage in rural Ireland that Scully now cleans and rebuilds with the demon energy of his love while awaiting his wife and child to return from Australia, where Jennifer has gone to sell their possessions. On the night before their arrival, Scully sees a troupe of ghost horsemen, their torches burning, arrayed before the ancient castle keep on his neighbor's land. The next day, a traumatized, mute Billie deplanes without her mother, who has somehow disappeared at Heathrow airport. To find her, Scully and Billie begin an odyssey to all the places they lived while Jennifer was aspiring to fulfill what she considered her artistic potential. Gradually, Scully realizes that there are things about Jennifer he could never admit to himself; tormented by fear, desperation and heartache, he almost loses his sanity. Precocious Billie, who knows things her father will never understand, uses the power of her love to redeem them both. Perhaps Billie is a little too wise and resilient and Scully not credibly protective of her welfare, dragging her into perilous situations. But Winton propels the narrative so quickly that one accepts Scully's obsession and Billie's compliance. Winton is particularly deft in creating the supporting characters in this powerful drama, all of whom assume vividly dimensional form. He also conjures up settings with a magician's hand: the frigid, barren Irish countryside; Australia drowsing in summer heat; a Greek island shorn of tourists in winter; Paris, Florence, Amsterdam. His terse, lyrical descriptions, the throbbing energy of his prose, can illuminate a scene like a lightning bolt, cut like a knife or wring the heart. Readers who met this stunning Australian writer in Cloudstreet or That Eye, the Sky, will find his talent fiercely honed. Author tour. (June)
close
Details