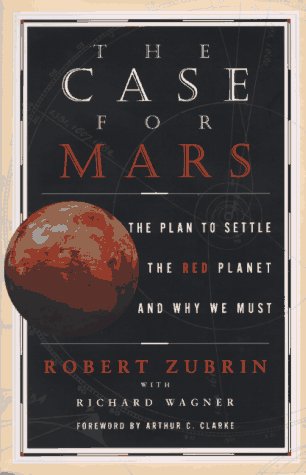 The Case for Mars: The Plan to Settle the Red Planet and Why We Must

Human settlement on Mars need not await the development of gigantic interplanetary spaceships, anti-matter propulsion systems or orbiting space bases, assert the authors of this exciting, visionary report. Instead, the ""Mars Direct"" plan--developed in 1990 by astronautical engineer Zubrin, and presented to NASA, where it has won supporters--calls for sending a crew and their artificial habitat directly to Mars via the upper stage of the same booster rocket that lifted them to Earth orbit. Then the crew will live off the land, growing greenhouse crops, tapping subsurface groundwater, manufacturing useful materials, constructing plastic domes and brick structures the size of shopping malls. Geothermal power would be tapped from hot regions near once-active volcanoes. Zubrin, senior engineer at Martin Marietta, and Wagner, a former editor of Ad Astra, weaken their case by arguing that a nascent human civilization on Mars will revive Earth's frontier spirit and American democracy, saving Western civilization from technological stagnation. Nevertheless, their detailed blueprint makes a fast-track mission to Mars--with an estimated price tag of $20-$30 billion--seem remarkably doable. (Nov.)
close
Details