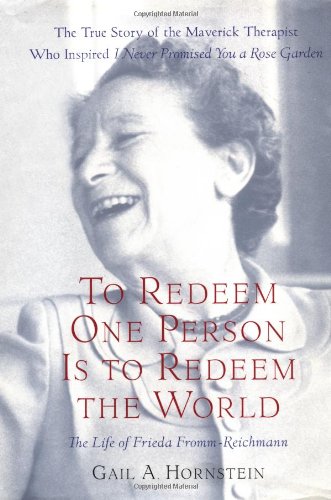 To Redeem One Person Is to Redeem the World: A Life of Frieda Fromm-Reichmann

Outside of psychoanalytic circles, Fromm-Reichmann is known best as the fictional Dr. Fried, the insightful and brave doctor who helps the deeply disturbed, schizophrenic heroine of Joanne Greenberg's 1964 novel I Never Promised You a Rose Garden. This first biography of Fromm-Reichmann is as thrilling and moving as Greenberg's now classic book. Thoroughly researched and elegantly written, Hornstein's biography details not only the psychoanalyst's life, personal and professional relationships, and ideas, but also takes on broader issues, such as the role that Judaism played in psychoanalytic thought, in-fighting in European and U.S. therapeutic communities, and abject abuses and reforms in the treatment of severely disturbed patients in state and private hospitals in the 1950s. Reichman--born into an upper-middle class Orthodox Jewish family in Germany in 1889--was an energetic and brilliant medical student who quickly achieved prominence in the newly formed field of psychoanalysis through her work with brain-damaged soldiers. In 1926, she married Erich Fromm, who was 15 years her junior as well as her patient. After coming to the U.S. in 1935, in the shadow of encroaching Nazism, Fromm-Reichman began a celebrated and notable career in American psychiatry, in which she distinguished herself for being one of the first psychoanalysts to perform breakthrough work with schizophrenic patients, thus opening up a whole new method of treatment for this long-neglected population. One of this biography's most dazzling and provocative themes is how Fromm-Reichmann's deeply religious Orthodox beliefs and worldview enabled her to rethink medical and psychoanalytic ideas. Hornstein, a professor of psychology at Mount Holyoke College, has produced a major biography of an important but, until now, relatively obscure figure. (Dec. 6)
close
Details