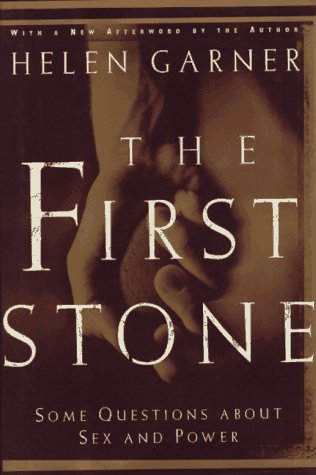 The First Stone: Some Questions about Sex and Power

In 1992, Australian journalist and novelist Garner read an account of a college master (a ""principal executive officer of a residential college"") being charged with indecent assault on two college women. For reasons not immediately clear even to herself, she sympathized with the man and slowly began to write a journalistic account of the case. The result is a marvelous, tension-filled, nonfiction novel, a sort of In Cold Blood of sex and power relations. She recounts, in tough, taut prose, a strenuous journey to determine the master's guilt or innocence that ends with finding, as one respondent put it, that ""The truth was at the bottom of the well."" But the author is actually peeling away layers covering another question, namely, whether men and women are parts of the same humanity. ""Our culture at large is obsessed, at the moment, with matters of sex and power in the relations between women and men,"" she observes. As a feminist, she recoils from ""a certain kind of modern feminism: priggish, disingenuous, unforgiving."" As a woman, she writes to men in a voice that other feminists rarely ever try and that compels male self-examination. The book's title, unfortunately, is almost a biblical cliche. An afterword, analyzing Australian reaction to the book, which has already been published in that country, concludes a vivid, dramatic story on a pale note. These are two minor quibbles with a major book. (Apr.)
close
Details