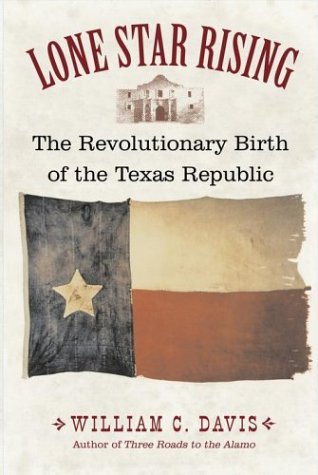 LONE STAR RISING: The Revolutionary Birth of the Texas Republic

The dream of making the Texan lands of Mexico an independent republic dated from the 1820s. When that vast territory achieved independence in 1836, much blood had been gruesomely spilled and a huge slice of Mexico had been forever lost to that hapless young nation. Starting even before the 1820s, veteran historian Davis ( , etc.) tells this story in sometimes wearying detail, but the book's merits make up for its occasional tedium. Unlike in previous accounts, here the (Spanish-speaking Mexicans who'd long lived in Texas) play a central role, along with the Anglo-Texans (Texians, in Davis's parlance) and non-Texan Mexicans. What's more, Mexico and its brilliant if erratic leader, Antonio Santa Anna, get their full due. And, yes, Davis doesn't forget to highlight tough-willed Stephen Austin and difficult Sam Houston. What ought to make the book most appealing to contemporary readers is Davis's success both in showing how three distinct peoples vied for and constructed the foundations of the modern Lone Star State and in illuminating the links and tensions among three distinct cultures and, in the end, three distinct polities: Mexico, Texas and the increasingly powerful U.S., whose role Davis scants. Despite its lack of a central argument, this book contains just about everything you'd ever want to know about its subject. Consequently, this encyclopedic rendering of an oft-told tale is likely to take its place among the invaluable modern works on Texas history. It will have to compete in the market, though, with H.W. Brands's due in February.