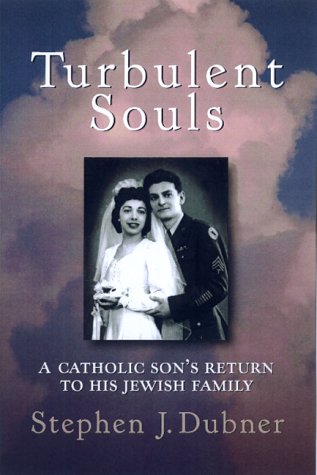 Turbulent Souls: A Catholic Son's Return to His Jewish Family

Dubner takes a searing and poignant look at his upbringing in a large, boisterous and fiercely devout Catholic family and his subsequent conversion to Judaism--the faith his parents discarded in their youth in favor of Catholicism. His parents' conversion was a torturous affair for their families, but Dubner, the youngest of eight children, grew up oblivious to his religious roots. ""For all I knew about Jews,"" he says, ""my parents might just as well have been Baptists, or Elks, or carnival workers."" His naivete ended when as an adult he began a spiritual quest, seeking out his relatives, especially his mother, for answers about religion. Dubner eventually embraced Judaism as his own. Heartbroken, his mother, who had devoted her life to Christ, couldn't understand why ""for whatever reason, the idea of Jesus the Messiah had never lodged itself inside [Dubner's heart]."" Dubner's skillful storytelling creates a captivating narrative. He writes of his childhood, ""Ours was an existence circumscribed by Mass and catechism, rustling hay rakes and muddy fishing ponds, the kids you could play with (the churchgoing Catholics) and those you couldn't."" Sentences like this bring alive all the joy, confusion, heartache and reparation of this family. (Nov.)
close
Details