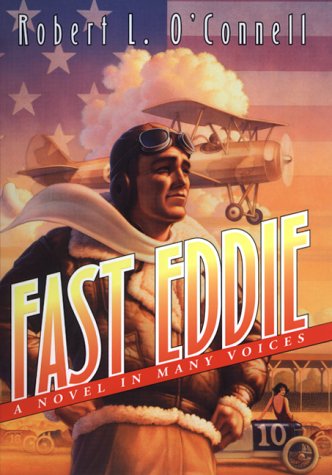 Fast Eddie: A Novel in Many Voices

An engagingly offbeat debut novel by an iconoclastic military historian (Of Arms and Men: A History of War, Weapons and Aggression), this is an often irreverent, even ribald, fictional biography of Captain Eddie Rickenbacker, the quixotic WWI flying ace and Medal of Honor winner. O'Connell inventively spins off anecdotes and opinions from the real and fictional friends, lovers, passing acquaintances and enemies who encountered the hard-headed, unflappable hero along his 82 adventurous years; not the least of these observations are frequent sarcastic asides from God. Born in 1890, one of seven siblings left penniless when his mother is widowed, Fast Eddie quits school before his 14th birthday and goes to work in a Columbus, Ohio, glass factory. Moving from one job to another, in 1906 he joins a local auto manufacturer and is quickly racing cars. Before turning 21, he's participated in his first Indy 500, and within a few years, Rickenbacker becomes, arguably, the top race driver in the U.S. When he blusters his way to France in 1917 as General Pershing's driver, he has never flown an ""aeroplane,"" but he runs roughshod over all opposition and wangles flight training from the French, thus beginning his legendary career as a celebrated WWI flying ace. Rickenbacker amasses an incredible 26 victories during the six months before the Armistice. Back home, he na vely lends his name to a new motor car company, unaware that the undertaking is a front for a clever stock scam. O'Connell's vividly polyvocal narrative details, often with swift humor, the incredible exploits (including surviving for three weeks in a raft adrift on the Pacific during WWII) of the man who was a war hero, commercial aviation pioneer, boudoir gymnast, political pawn, social pariah and American legend. Agent, Brandt & Brandt. (Aug.)
close
Details