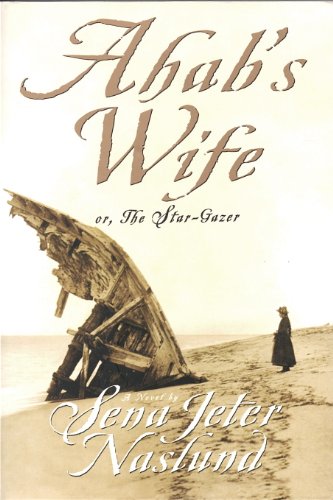 Ahab's Wife: Or, the Star-Gazer: A Novel

""Captain Ahab was neither my first husband nor my last,"" says Una Spenser, the eponymous narrator, in the first sentence of this deliciously old-fashioned bildungsroman, adventure story and romance. Naslund's inspiration, based on one reference in Moby-Dick, may not satisfy aficonados of Melville's dense, richly symbolic masterpiece, but it should please most other readers with its suspenseful, affecting, historically accurate and seductive narrative. At age 12, Una escapes her religiously obsessed father in rural Kentucky to live with relatives in a lighthouse off New Bedford, Mass. When she is 16--disguised as a boy--she runs off to sea aboard a whaler, which sinks after being rammed by its quarry. Una and two young men who love her are the only survivors of a group set adrift in an open boat, but the dark secret of their cannibalism will leave its mark. Rescued, Una is wed to one of the young men by the captain of the Pequod, handsome, commanding Ahab, who has not as yet met the white whale that will be his destiny. These events--recounted in stately prose nicely dotted with literary allusions--take the reader only through the first quarter of the book. Una's later marriage to Ahab--a passionate and intellectually satisfying relationship--the loss of her mother and her newborn son in one night, and her life as a rich woman in Nantucket are further developments in a plot teeming with arresting events and provocative ideas. Una is an enchanting protagonist: intellectually curious, sensitive, imaginative and kind. But Naslund also endows her with restlessness, rash impetuosity and a refreshing skepticism about traditional religion, qualities that humanize what verges on an idealized personality, and that motivate Una's search for spiritual sustenance. Unitarianism and Universalism are two of the religions she investigates; other ""dark issues of our time"" include slavery, and the position of women. Social and cultural details texture the lengthy, episodic, discursive narrative. Una's search for identity brings her friendship with such real life figures as writer Margaret Fuller and astronomer Maria Mitchell, and with such colorful fictional characters as an escaped slave and a dwarf bounty hunter. Even Halley's Comet makes an appearance. Provocatively, Naslund (The Disobedience of Water) suggests a new source of Ahab's demented rage to kill the whale who has ""unmasted"" him. Some elements of the novel jar, especially Naslund's tendency to pay rhapsodic tributes to Una's questing spirit; a surfeit of noble, large-souled and amazingly generous characters; and the symmetrical neatness of the plot. In the last third of the book, readers may become weary of Una's spiritual reflections and the minutiae of her daily routine. But these are small faults in a splendid novel that amply fulfills its ambitious purpose offering a sweeping, yet intimate picture of a remarkable woman who both typifies and transcends her times. Illustrations by Christopher Wormell. 150,000 first printing; $150,000 ad/promo; 20-city author tour; BOMC main selection; Simon & Schuster audio. (Oct.)
close
Details