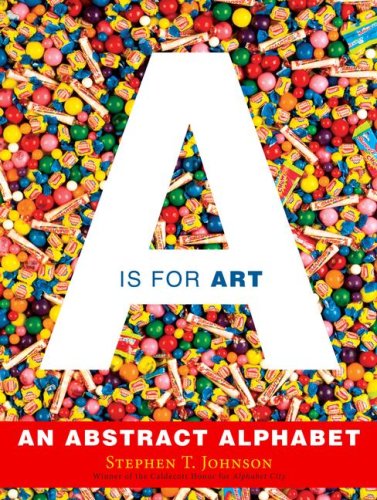 A Is for Art: An Abstract Alphabet

Baby Einstein grads seeking their first coffee-table book might savor this abecedary, which pays homage to abstract expressionism and pop art. Johnson ( ) creates a multimedia artwork for each letter and describes it with a lengthy alliterative caption. Letter C’s “Camouflage” consists of “countless colorful candies” in a “clear circular container.” In H’s “Hoopla,” an installation of silvery-blue hula hoops hangs from an industrial ceiling, while M’s “Meditation on the Memory of a Princess” references fairy tales with eight stacked magenta mattresses and a “mini mauve marble.” Connoisseurs will detect allusions to Rauschenberg, Lichtenstein and Motherwell; details of the pieces sometimes become microscopic on the pages, but a dust-jacket photo of Johnson in his studio confirms this project’s impressive scope. Unfortunately, salient associations can be lost in transition to page with the reduction of scale. Crisp white backgrounds reinforce the book’s resemblance to an exhibition catalogue, as does a disconcertingly lofty foreword where Johnson explains, “I took ordinary objects and made them unfamiliar, removing functionality in order to reveal their potential metaphorical associations.” The apparatus may not enhance the ABC game, but opens the book to an adult audience. Ages 5–9.