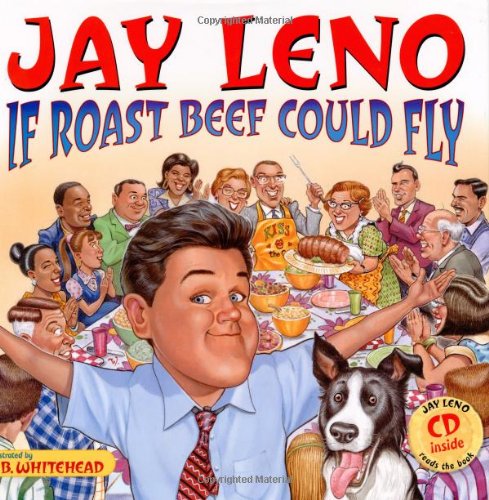 IF ROAST BEEF COULD FLY

Comedian Leno adapts a family-friendly stand-up bit for this pleasantly silly picture book. Dad, famous for his overblown projects, decides to build a patio deck and a giant barbecue rotisserie in the backyard. After a trip to the "Hardware Supermax store" ("Okay! We need five hundred bricks! Two hundred pounds of cement!" says Dad) and a few months of tinkering, his father unveils the rotisserie. As a giant roast beef turns on the spit for the Leno family's end-of-summer barbecue, young Jay's mouth waters. ("Juice is dripping! Fat is sizzling!... I'm dying to taste the roast beef.") Jay whips out his "secret weapon"—a plastic comb—and repeatedly steals some drippings with the unorthodox implement. But to Jay's great dismay, the comb ends up stuck in the roast, prompting a chaotic and funny denouement. Though many youngsters will miss some of the humor that falls between the lines (which adults will enjoy), the wacky scenario is likely to keep children interested (especially young Jay's anxious look as he awaits the inevitable). Leno's talent for storytelling and affection for his family shines through—especially on his CD recording of the text (packaged with the book). Whitehead ( ) exaggerates the features and expressions of the characters in his crisply rendered watercolors, in keeping with the farcical tenor of the tale. Period details from automobiles and clothing to furniture add flavor. And his likeness of Leno—basically a miniature version of the TV personality—is particularly engaging. All ages.