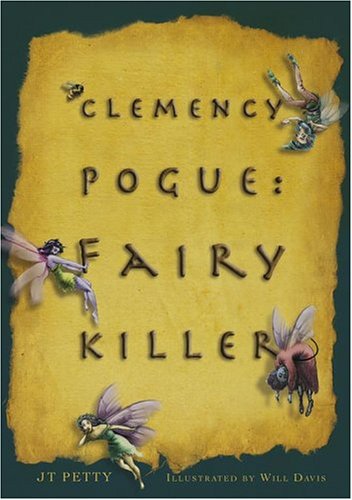 Inanity abounds in Petty's debut novel, a snippet of a tale that borrows from the sagas of Peter Pan and Rumpelstiltskin. After a nasty fairy stings Clemency repeatedly with a burning wand and causes the 10-year-old to tumble into a deep gorge, she recalls that there was "in the story of the little boy who never grew up, instruction for the extermination of fairies" and declares, "I don't believe in fairies!" Because she utters this sentence seven times, Clemency inadvertently kills not only the fairy tormenting her, but six others as well. A hobgoblin appears and, when Clemency unknowingly utters his name and becomes his master, he agrees to accompany her to the sites of the fairies' demises. Tunneling through the earth at a rapid pace, the two visit the children whose lives have been affected by the diminutive creatures' deaths, including a boy in Salt Lake City who woke up to find that the Tooth Fairy hadn't retrieved his tooth—and was lying dead on his pillow; a lovesick lad in Brazil whom the Fairy of Love and Tenderness was helping to write a poem to his beloved when that fairy was struck dead; and a girl in Siberia whose infected ear contains a pea and the body of the Fairy of Noninvasive Surgery, who had died while attempting to remove the legume. Though Petty works some clever wordplay and comic elements into his narrative, readers are likely to find Clemency's path to reversing the curse lengthy and laborious. Ages 8-12. ( )