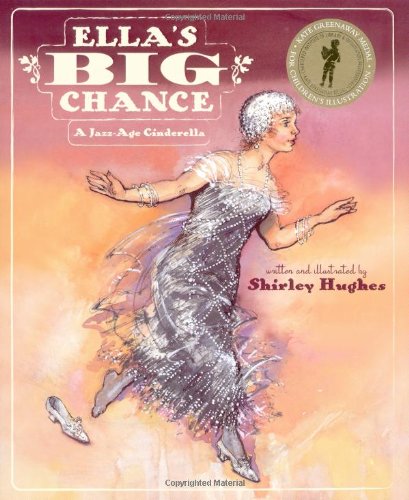 British author Hughes (the Olly and Me series) updates a classic with flapper fashions and an unexpected finish. Red-haired Ella Cinders and her father run their own dress shop, along with their delivery man, Buttons. When Mr. Cinders remarries Madame Renée (who "seemed to pop up from nowhere like a sharp-eyed, expensively dressed jack-in-the-box"), Ella's life takes a miserable turn as she endures the taunts of her lazy stepsisters, and Mr. Cinders gets "far too much under his wife's thumb to interfere." The length of this jaunty, if sometimes clichéed, retelling, as well as some of the vocabulary ("languid," "divan") and British colloquialisms may prove daunting to a younger audience. However, Hughes's fluid lines and bright colors contribute to illustrations with such graceful movement that they might have been inspired by Fred Astaire and Ginger Roger's movies, as well as by 1920s French couture. Pen-and-inks ornament each framed block of text, and depict either a preceding or subsequent scene to the action shown in the larger full-color illustrations. Most of the tale stays true to the original, but a twist at the end may well leave readers admiring the sprightly heroine in Hughes's version. Ages 4-8.