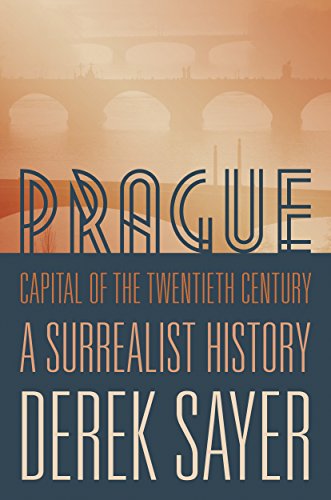 Prague, Capital of the Twentieth Century: A Surrealist History

Cultural historian Sayer (The Coasts of Bohemia: A Czech History) delivers a dense but captivating portrait of 20th-century Prague, a city that entered the 20th century as part of the Austrian-Hungarian Empire, then successively became a democracy, a Nazi-occupied Protectorate, a Soviet puppet state, and finally a “reborn post-Communist republic.” Mainly covering the period from 1914–1991, Sayer highlights Prague’s cultural landscape (and dreamscape), particularly the time between the world wars, when the capital was a crucible of modernist architecture and art, and a mecca for surrealist artists and writers from Kafka to Toyen, as well as appreciative Parisian visitors André Breton (founder of surrealism) and poet Paul Éluard. For Sayer, boulevards, buildings, squares, clocks, hotels, poems, paintings, and operas conjure fertile associations, allowing him to delve into the city’s rich political and cultural history. Noting that Prague became a place where “modernist dreams have time and again unraveled,” he explores the effect the Communist Party, Nazism, the world wars, and the Soviet takeover had on the city’s artists and architecture. The breadth of Sayer’s knowledge is encyclopedic, and those willing to stay the course will be rewarded. (May)
close
Details