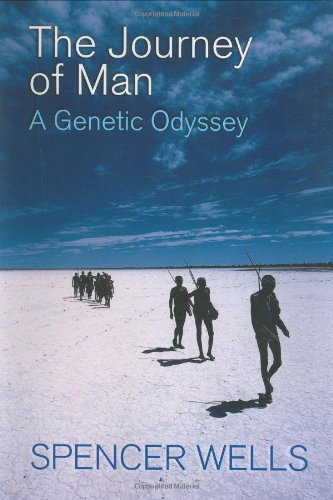 The Journey of Man: A Genetic Odyssey

In this surprisingly accessible book, British geneticist Wells sets out to answer long-standing anthropological questions of where humans came from, how we migrated and when we arrived in such places as Europe and North America. To trace the migration of human beings from our earliest homes in Africa to the farthest reaches of the globe, Wells calls on recent DNA research for support. Clues in the blood of present groups such as eastern Russia's Chukchi, as well as the biological remnants of long-extinct human clans, allow Wells to follow the Y chromosome as a relatively unaltered marker of human heritage. Eventually, working backward through time, he finds that the earliest common ""ingredient"" in males' genetic soup was found in a man Wells calls the ""Eurasian Adam,"" who lived in Africa between 31,000 and 79,000 years ago. Each subsequent population, isolated from its fellows, gained new genetic markers, creating a map in time and space. Wells writes that the first modern humans ""left Africa only 2,000 generations ago"" and quickly fanned out across Asia, into Europe, and across the then-extant land bridge into the Americas. Using the same markers, he debunks the notion that Neanderthals were our ancestors, finds odd links between faraway peoples, and--most startlingly--discovers that all Native Americans can be traced to a group of perhaps a dozen people. By explaining his terminology and methods throughout the book, instead of in a chunk, Wells makes following the branches of the human tree seem easy. 44 color photos, 54 halftones and 3 maps.
close
Details