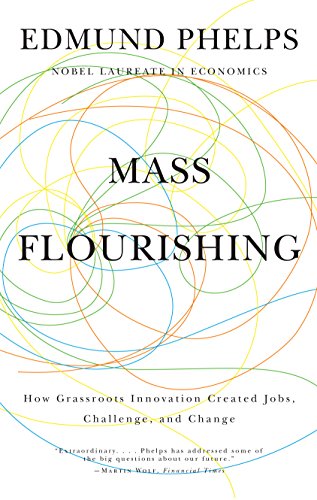 Reviewed by Gilbert T. SewallNobel Prize–winning economist Phelps (Designing Inclusion), director of Columbia University’s Center on Capitalism and Society, attempts to define the experience of modern economic life in his latest book. Now 79, Phelps is best known for his findings on time-related macroeconomic trade-offs. This panoramic view of economic institutions considers individual freedom and the capacity to develop talent to be modernity’s indispensable gifts. For Phelps, the masses, not isolated visionaries like Steve Jobs, are the agents of “flourishing.” While the future is indeterminate, Phelps writes, “Originality is a renewable energy, driving the future in unknowable ways.” As prime ingredients, Phelps cites “modern” values such as working and thinking for yourself, self-expression, eagerness to work, competition, and the legal rights of individuals. Values determining a country’s “generation of high economic performance” include the “desire to conceive novel ideas, to develop these ideas into new products, and to try out the new products.” To support his argument, Phelps draws from Aristotle, Abraham Maslow, Friedrich Nietzsche, Henri Bergson, and John Rawls. In addition, he inventively utilizes literary figures and creative geniuses including Emily Brontë and J.M.W. Turner. The book bubbles with speculative connections, including some—such as an account of why Beethoven “rocketed” to popularity—that seem far-fetched. But Phelps’s range is bracing. On self-discovery, he even cites Lady Gaga. In contemporary economies, Phelps deplores subsidies and special-interest legislation and the “sorry record of unintended consequences” they have induced in agriculture, housing, energy, and finance. In the U.S., he ponders the “new corporatism” of the Democratic Party. He takes aim at regulative drag, structural unemployment, executive salaries, and rising market barriers as he worries over the future “supply of innovation.” America’s peak years of innovation ran from the 1820s to the 1960s, Phelps thinks (here and elsewhere). He argues that a slowdown in dynamism since then has contributed to soaring inequality; his conclusions that economic flourishing remains alive today and that the West retains its “can-do spirit” are not fully convincing. The book is designed to be an academic mandarin’s epitome. At the end of the book, putting himself squarely in the center of history and economic thought since the beginning of time, Phelps risks more than a tinge of egotism. However, inquiring readers, not just academics and social scientists, will enjoy the vast learning in Phelps’s sophisticated, sometimes sardonic, look at homo economicus. 20 line illus., 5 tables. Agent: Andrew Wylie, Wylie Agency. (Sept.) Gilbert T. Sewall is the author of Necessary Lessons and editor of The Eighties: A Reader.
close
Details