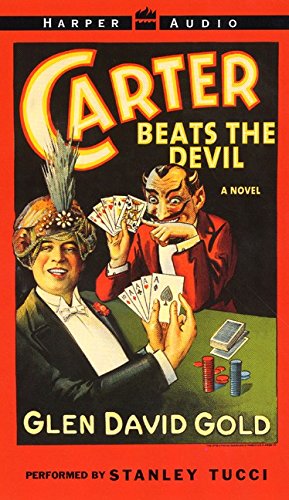 Tucci gives Gold's bewitching tale of intrigue, deception and—most important of all—magic a performance of which both author and actor should be proud. Set in Roaring '20s San Francisco, the story takes off when President Harding agrees to appear in the finale of a show with magician Carter the Great, going through a series of dicey illusions before emerging on stage at the end to take a bow and declare his good health. Problems arise when Harding dies under strange circumstances two hours later. The rest of Gold's debut novel follows the death's ramifications for Carter and those around him, while tracing the magician's own development through a series of flashbacks. Tucci (, ) skillfully handles the wide array of often eccentric characters. His nasal interpretation of a corrupt conjurer named Mysterioso sounds like a slightly more dastardly version of Professor Hinkle of fame, and he is equally comfortable rendering young lovers' sweet nothings and the stentorian showmanship of a performer on stage. Listeners will lap up this enticing adventure.