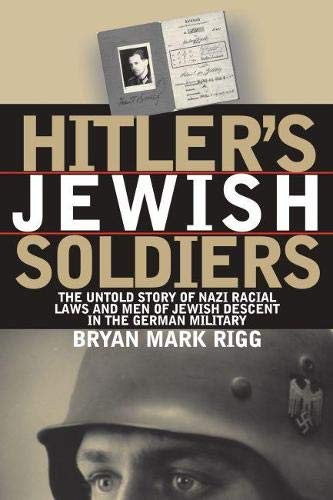 HITLER'S JEWISH SOLDIERS: The Untold Story of Nazi Racial Laws and Men of Jewish Descent in the German Military

What the Nazis called partial Jews, or , served in the Wehrmacht during World War II, often joining to prove their loyalty and becoming decorated soldiers. Rigg, who received a B.A. from Yale in 1996, studied at Cambridge and currently teaches at the online American Military University, estimates their numbers to have been in the range of 150,000. He begins by carefully describing Nazi racial law and recounting the assimilation and military service of "¼ Jews" (among other categories) in the German and Austrian states in the two centuries before WWI. Moving on to the Nazi era, Rigg details the exemptions to Aryan law that allowed to serve. The extent to which the knew of the regime's true character is a constant theme, and feelings of helplessness in the face of knowledge of the Holocaust are vividly illustrated with numerous examples, such as the soldier who visited Jewish relatives the night before they were deported to an extermination camp not knowing then that "deportation" meant "death." Interviews with some surviving (including former chancellor Helmut Schmidt, who served in the Luftwaffe), along with quotations from memoirs and diaries, help to enliven an otherwise dry, academic style. By 1944, many of the loopholes in the racial purity laws were closed, and many military perished in the camps. Those who survived were later often rejected by the Jewish community because of their service in the German armed forces.