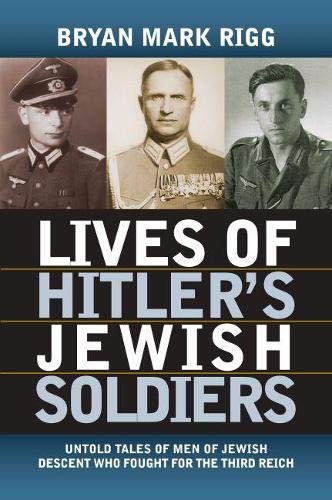 Lives of Hitler's Jewish Soldiers: Untold Tales of Men of Jewish Descent Who Fought for the Third Reich

Several thousand Jews and over 100,000 others of Jewish descent served in the Wehrmacht from 1939 to 1945. Rigg dips into material he mined for to present a selection of personal histories. Many enlisted to protect their families, often in vain; Rigg tells heartrending stories of soldiers risking their lives in battle as relatives disappeared into extermination camps. When police grew suspicious of his forged papers, Karl-Heinz Löwy enlisted in the elite Waffen-SS, apparently its only Jewish member, and fought heroically. Helmut Krüger and Karl-Heinz Schleffler were serving faithfully when Hitler ordered all half-Jews discharged in 1940. Although they and the others discharged spent much of the war in dreadful labor camps, far more of them survived than thousands who appealed successfully to remain in service. Readers expecting expressions of shame will be surprised—most felt proud of their wartime experiences. Few admitted knowing of the Holocaust, but all knew Jews were being mistreated and felt helpless to change matters. As Rigg compellingly shows, these were men dealing with crushingly stressful circumstances as best they could. 64 photos.