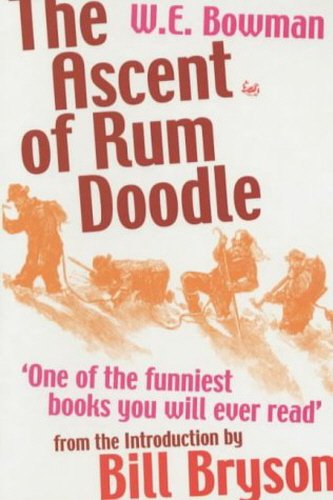 THE ASCENT OF RUM DOODLE

A bumbling group of British mountaineers mounts an assault on Rum Doodle, a slightly higher neighbor of Everest, in Bowman's parody novel, which was published in 1956 and became a classic within the climbing community. Bowman cobbles together a wide-ranging crew of lovably clueless climbers, including the puffed-up narrator, Binder, and a misguided guide named Humphrey Jungle, who constantly gets lost and turns up in unlikely places. Other prominent members include measurement-obsessed scientist Christopher Wish as well as linguistic expert Lancelot Constant, whose chief talent seems to be ticking off the porters from the indigenous tribe called the Yogistani, who speak through their stomachs via a series of indecipherable grunts. Early on, a memorable mishap occurs, in which Jungle ends up falling into a crevasse and the rescue effort consists of the rest of the crew joining him while they get soused on "medicinal" champagne. Bowman also offers a couple of predictable chapters as the group goes in circles and then proceeds to climb the wrong mountain, and he spends an inordinate amount of prose on their suffering at the hands of the sadistic cook, a Yogistani named Pong. Bowman manages to sustain a very thin conceit for a large number of chapters, although the silliness can at times be sophomoric. He redeems himself somewhat with an amusing "surprise" ending that features the 3,000 Yogistani porters involved in the expedition, and overall he proves himself to be an entertaining humorist who has much to offer for readers who like their outdoor humor dripping with understated British irony. B&w illus.