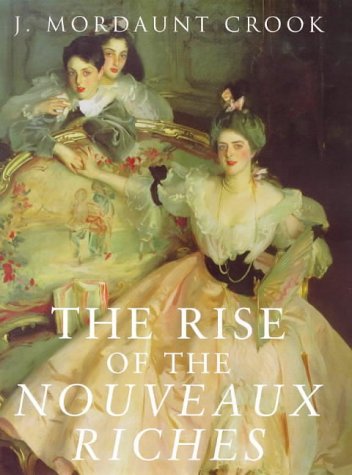 The Rise of the Nouveaux Riches: Style and Status in Victorian and Edwardian Architecture

This is an account of how the new men of industry and finance in the 19th and early 20th centuries turned their miraculous wealth into architecture and, by extension, social standing. Along the pleasing if winding and anecdotal way, veteran British architectural historian Crook makes some fascinating observations about the efforts of the nouveaux riches to use English country houses, Lake District villas and London townhouses to build their way into social and political power. He also shows how it was not the nouveaux riches who pioneered the Gothic, Tudor or Jacobean revival styles, but the old landed aristocracy. The newly rich looked further back, to the Classical vocabulary, to find a style that suited their aims. Finally, he argues that the early 20th century brought a ""democratization of wealth"" as the small club of British aristocracy was redefined as a ""self-renewing plutocracy."" Despite these suggestive findings, the effect of the study as a whole is disappointing. Readers interested in social history will find little beyond the sources of various families' wealth and the names of their architects; readers seeking a careful look into the design and life of the homes of the nouveaux riches will find only cursory descriptions (and small black and white photographs) of the homes and the styles in which they were cloaked. Given the current creation of a new generation of nouveaux riches with its own approaches to philanthropy and architectural patronage, Crook's exploration of how last century's millionaires constructed their ideals is attractive reading. But it may prove more useful for its footnotes than for its text. 81 pages of photos. (Dec.)
close
Details