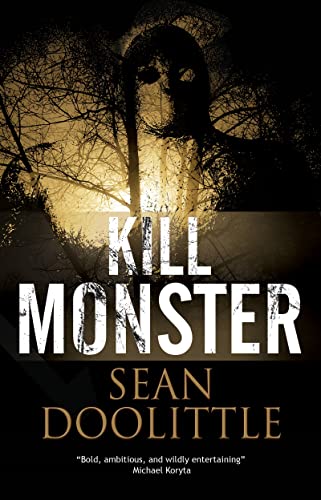 Doolittle (Lake Country) delivers a rambunctious monster story that features precise wit, messy violence, aggressive pacing, and a charmingly incongruous cast. Ben Middleton, a nondescript, middle-aged, divorced IT tech in Omaha, Neb., becomes a target when a dormant golem is unearthed from the buried remains of a steamship and revives. Created to thwart Ben’s pro-Confederate ancestor, the golem has an unfinished task—to kill those whose blood he was given—and Ben and his son, Charley, are the only ones who qualify. As they flee, they’re joined by Reuben Wasserman, who’s upholding a family promise to guard the Middletons; Anabeth Glass, a merry, unkillable woman who knows more than she lets on; and some of Ben’s hapless IT colleagues. Meanwhile, Malcolm Frost, a disgraced “supernatural arms dealer” with his own violent tendencies, wants to harness the creature’s powers for his own gain. The superb blend of action with both humor (“Moving as if controlled by somebody who knew what they were doing, Ben scooped up the gun”) and gore (“Arnie Dillon’s head split open in a pulpy splurt of brain and bone”) keeps Doolittle’s novel swift and highly entertaining. Cattle mutilations, snarky teens, and an A-Team van all slot perfectly into place in this splattery madcap venture. Agent: David Hale Smith, InkWell Management. (Sept.)
close
Details

Lost Places
Lost Places
Sarah Pinsker
This remarkable collection of 12 speculative shorts from Pinsker (Sooner or Later Everything Falls into the Sea) places celebrated favorites and hidden gems side by side. The Continue reading »
chevron_right