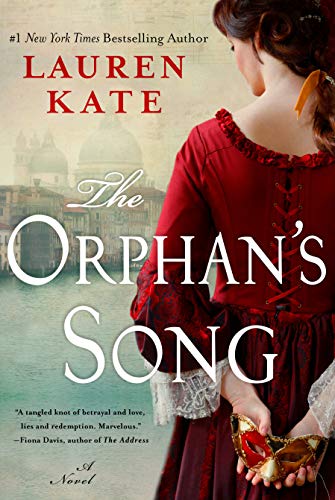 Set in 18th-century Venice, this delightful historical from Kate (Fallen) follows Violetta and Mino, two orphans being raised at the Hospital of the Incurables, which is equal parts orphanage, hospital, and music school. Sixteen-year-old Violetta, who dreams of singing in the Incurables’s chorus, and Mino first meet on the Incurables’ rooftop. Violetta has escaped from making Confession, and Mino comes to the roof to play his violin in secret to escape the orphanage’s prohibition against males learning music. As they continue to meet on the rooftop, they become drawn to each other over their love of music. Despite their mutual affection, Violetta’s ambition and Mino’s desire to find his birth mother force them apart. After Violetta joins the chorus, Mino, who was dropped off at the orphanage when he was three, discovers that Violetta, then five years old, witnessed his mother bringing him to the orphanage and heard a peculiar song Mino’s mother had been singing. After escaping the hospital to find her, Mino struggles to survive and becomes a luthier; meanwhile, Violetta, now bound by oath to sing only at the Incurables, sneaks out to clandestinely perform in the streets of Venice at night. Soon, Violetta and Mino’s mutual love for music draws them to each other—and to the secret of Mino’s origins. Kate’s enchanting story brings the canals and backchannels of Venice to vivid life and will appeal to fans of Elizabeth Chadwick. [em](June) [/em]
close
Details