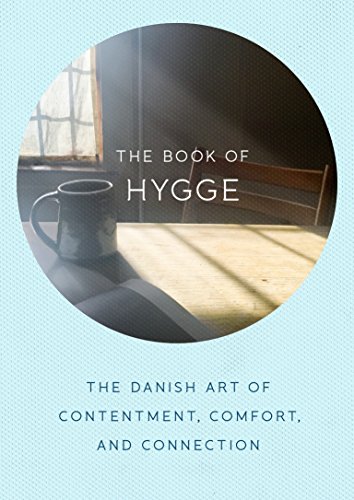 The Book of Hygge: The Danish Art of Contentment, Comfort, and Connection

Brits, who’s half Danish and half English, considers the Danish practice of hygge (pronounced HYOO-guh), a word that can be used as noun, verb (hygger), or adjective (hyggelig), in this inviting book that painstakingly explains how the Danes, “among the happiest people in the world,” have woven the concept into their lives. She divides the book into sections on belonging, shelter, comfort, well-being, simplicity, and observance, with photos by Susan Bell used as appealing accents throughout. Hygge, Brits explains, can cover a wide variety of experiences, both private moments such as relaxing with a cup of tea and public moments joining friends for a candlelight dinner or walk on the beach. Brits shares insights about Danish culture; children are taught hygge early on, and raised with egalitarian values. Danish furniture also reflects the concept (practicality, simplicity, and quality) and homes are often low-rise buildings (many Danes, she explains, also own modest summer cottages). In this cultural environment, pomposity, ostentation, and aggression are neither encouraged nor admired. In increasingly fast-paced and competitive America, hygge has considerable appeal; readers may very well find reading Brits’s compact and enjoyable book the literary version of the practice. [em]Agent: Sophie Hicks, Sophie Hicks Agency (U.K.). (Feb.) [/em]
close
Details