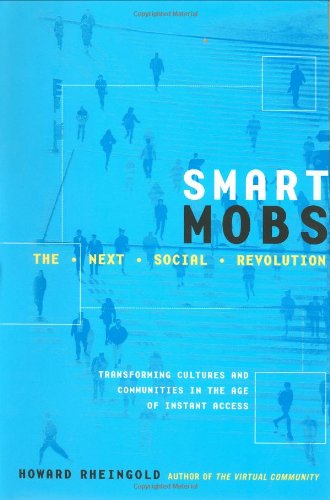 SMART MOBS: The Next Social Revolution

The title of this book is a mild pun. People are using smart "mobs" (rhymes with "robes") to become smart "mobs" (rhymes with "robs"), meaning, sophisticated mobile Internet access is allowing people who don't know each other to act in concert. In this timely—if at times overenthusiastic—survey of wireless communication devices, Rheingold () conveys how cell phones, pagers and PDAs are shaping modern culture. He interviewed dozens of people around the world who work and play with these technologies to see how this revolution is manifesting, and his findings are stirring. The concept has caught on among young Japanese, where cliques of teenagers hang out together all day, despite being in different places, by sending and receiving hundreds of iconic text transmissions on their iMode telephones. And demonstrators in Seattle and Manila relied on wireless telephones to coordinate their actions and evade barricades. In major cities, Rheingold says, techno-hipsters can congregate in "WiFi" areas that interact with their wireless devices to let them participate in a virtual social scene. In one amusing example, he tells of upscale prostitutes who can enter their services and prices into their mobile phones, allowing customers to discreetly determine if anyone nearby is selling what they want to buy (a Japanese company, Lovegety, has already adapted this idea to dating). This study of the potential of mobile, always on, fast Internet access nicely serves as a travelogue to the future, showing the possibilities and dangers of communications innovation.