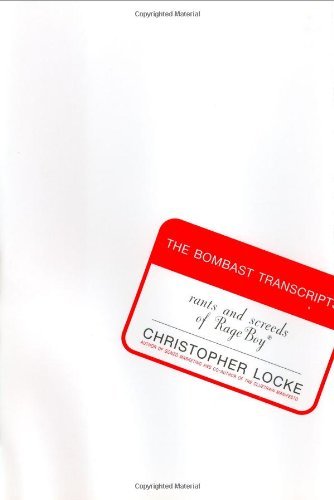 THE BOMBAST TRANSCRIPTS: Rants and Screeds of RageBoy

RageBoy, the cyber-handle of gonzo-journalist Locke, has collected here his online columns, mostly from his Web zine, . Entries range from the autobiographical (his LSD and drinking years, followed by his own weird version of sobriety) to mock-interview (his chats with TV horse Mr. Ed or "Moe Ron Hubbard, father of Diuretics and Sayonaralogy"). Favorite targets include corporate culture (which he'd consider an oxymoron) and academic posturing (his "Snack with André" imagines situationist philosopher Guy Debord as Port Authority panhandler DeMerde; his piece "deriding Derrida" exposes French postmodernists as so many "petty control freaks"). While his rants take potshots at a variety of cultural sacred cows (including a wicked analysis of America's fondness for the Weather Channel), it's Locke's own history as an early artificial intelligence/cyberspace pioneer that informs his most damning critique—the co-optation of the Internet. In the early days, people who knew how the Internet worked "were mainly using it to fuck off… We thought it was to fuck off." They wanted the Internet to be different from all the other media, a place to "tell stories" about things that mattered, like "heaven, earth, man, woman." But it wasn't long before the "marketing boys" took over, reducing the Net to just another way to sell product. Resurrect William Burroughs, Charles Bukowski and Ken Kesey, add a dash of Dilbert—and that's RageBoy. Though it's not for everyone, this "browser-free format" may bring in new audiences.