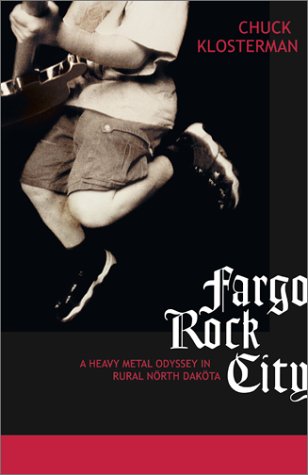 Klosterman's highly touted debut has as much to do with Fargo, N.D., as the Coen brothers' slice of Americabre, . That is, nothing at all, really. Misleadingly titled to cash in on Fargo's cinematic mystique, Klosterman's memoir about growing up a sexually repressed metalhead, with a humiliating (mom-dictated) Richie Cunningham haircut is actually set in Wyndmere, N.D. Klosterman starts up with a bang ("You know, I've never had long hair"), shifts gears often (from memoir to music criticism, somewhat jarringly at times), and rarely idles. Ultimately, though, Klosterman, ironic throughout the book, does not write with enough sincerity to prove his thesis—"that all that poofy, sexist, shallow glam rock important." Granted, it's a daunting task to write a hymn of praise to the genre that spawned David Lee Roth—so the author wisely stretches his pop-culture references like taffy. In the final chapter Klosterman, now an arts critic for Ohio's quotes a friend's definition of a "guilty pleasure"—"something I pretend to like ironically, but in truth is something I really just like"—to explain how he really feels about glam metal. His closing summation of what metal means to isolated kids in the heartland will strike a power chord for many readers.