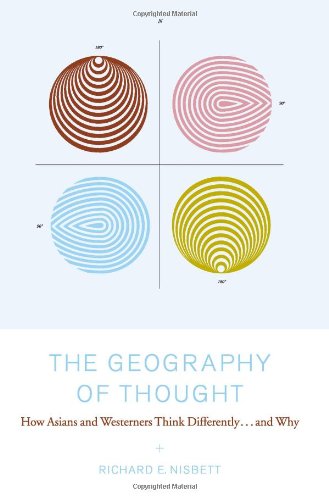 THE GEOGRAPHY OF THOUGHT: How Asians and Westerners Think Differently... and Why

This book may mark the beginning of a new front in the science wars. Nisbett, an eminent psychologist and co-author of a seminal paper on how people talk about their decision making, reports on some of his latest work in cultural psychology. He contends that "[h]uman cognition is not everywhere the same"—that those brought up in Western and East Asian cultures think differently from one another in scientifically measurable ways. Such a contention pits his work squarely against evolutionary psychology (as articulated by Steven Pinker and others) and cognitive science, which assume all appreciable human characteristics are "hard wired." Initial chapters lay out the traditional differences between Aristotle and Confucius, and the social practices that produced (and have grown out of) these differing "homeostatic approaches" to the world: Westerners tend to inculcate individualism and choice (40 breakfast cereals at the supermarket), while East Asians are oriented toward group relations and obligations ("the tall poppy is cut down" remains a popular Chinese aphorism). Next, Nisbett presents his actual experiments and data, many of which measure reaction times in recalling previously shown objects. They seem to show East Asians (a term Nisbett uses as a catch-all for Chinese, Koreans, Japanese and others) measurably more holistic in their perceptions (taking in whole scenes rather than a few stand-out objects). Westerners, or those brought up in Northern European and Anglo-Saxon–descended cultures, have a "tunnel-vision perceptual style" that focuses much more on identifying what's prominent in certain scenes and remembering it. Writing dispassionately yet with engagement, Nisbett explains the differences as "an inevitable consequence of using different tools to understand the world." If his explanation turns out to be generally accepted, it means a big victory for memes in their struggle with genes.