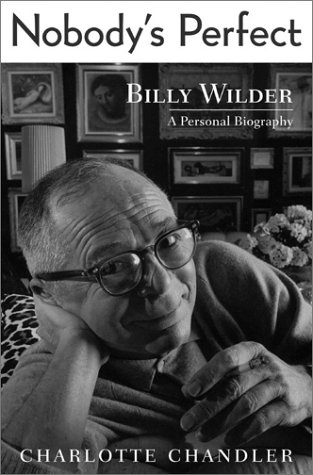 Everyone knows Wilder's reputation as a consummate storyteller who had one—true or not—for every occasion. Upon his death in March of this year, homages to the great director were filled with well-known anecdotes, passed along like great jokes. They were always funny and showed the filmmaker at his sharpest, but they also helped obscure the man behind a wall of wit and showmanship. This new biography from Groucho Marx and Federico Fellini biographer Chandler, which takes its title from the last line of , avoids this trap by simply letting Wilder talk—at length. Unlike Cameron Crowe in his 1999 book of conversations with Wilder, Chandler keeps herself mostly in the background, popping up only occasionally to point out which actor had led her to interview which director, and so on. As a result, the book is a rich compendium of primary source material, containing interviews with Wilder himself, Kirk Douglas, Jack Lemmon, Shirley MacLaine, Ginger Rogers, Jimmy Stewart, Gloria Swanson and others. The book doesn't offer lengthy discussions of Wilder as a cinematic genius; readers will not find critical appraisals of or . However, the author does richly document the making of some of Wilder's masterpieces and open the sluice gates for the voluble Wilder as well as the recondite storytellers mentioned above. Altogether, it makes for a comprehensive portrait of Wilder that goes beyond the witty stories. Photos.