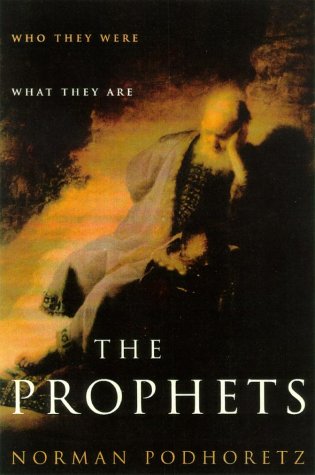 THE PROPHETS: Who They Were, What They Are

In what initially appears to be a radical departure from his previous eight books, some of which were autobiographical accounts of Podhoretz's move from left to right, this effort deals with the Hebrew prophets, a new subject for the former editor of magazine. To his credit, he does indeed present a scholarly analysis of the prophets, but it is interwoven with too many references to himself. Moreover, the lessons that Podhoretz derives from his study of the prophets, as detailed in the last chapter, "The Prophets and Us," are a rehash of the neo-conservative views expressed in his other books. He condemns relativism, the counterculture, political correctness, the women's movement, deconstructionism, multiculturalism and environmentalism. He likens his own views to those of the biblical prophets as they fought for monotheism and opposed paganism. Podhoretz gives consideration to all 21 prophetic books in the Bible, as well as to Abraham and Moses. However, he focuses mostly on Amos, Hosea, Micah, Isaiah ("First" and "Second"), Jeremiah and Ezekiel. He examines their writings, drawing extensively on the work of biblical scholars. Although he describes himself as an "amateur" and a "non-specialist," he doesn't hesitate to give his opinions on disputes among the various schools of biblical interpreters. Podhoretz deserves to be applauded for venturing beyond himself (at least in part) as the subject of his books, but readers interested in the prophets may wish to consult scholarly sources directly rather than rely on Podhoretz's rendering of their ideas.