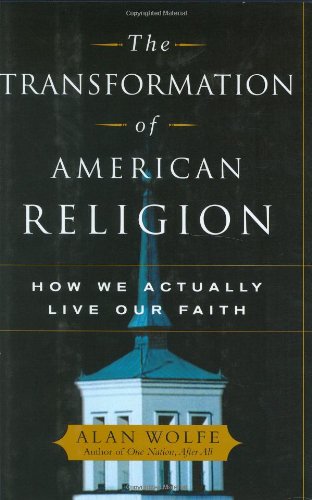 THE TRANSFORMATION OF AMERICAN RELIGION: How We Actually Live Our Faith

We have come to the end of American religion as we once knew it, proclaims sociologist Wolfe. Drawing on interviews with practicing Protestants, Catholics and Jews, Wolfe examines the ways that American religion has been so transformed over the past five decades that it is no longer recognizable. He explores every facet of American religion—worship, fellowship, doctrine, tradition, morality, sin, witness and identity—as he investigates the fading of practices or beliefs that once dominated. For example, he observes that discussion of doctrine has almost disappeared from churches as they have focused more and more on emotional response to worship or belief and less on intellectual investigations of a church's history or creed. Wolfe also points out that the increasing religious pluralism in America has altered not only the faiths traditionally practiced in America but also those of immigrants who bring their religions with them from their native countries. Over the past 40 years, Wolfe argues, American religion has become "more personalized and individualistic, less doctrinal and devotional, more practical and purposeful." Although Wolfe's study offers some lively reporting and clear prose, it provides little new information about the decline of American religion and the newly altered religious landscape.