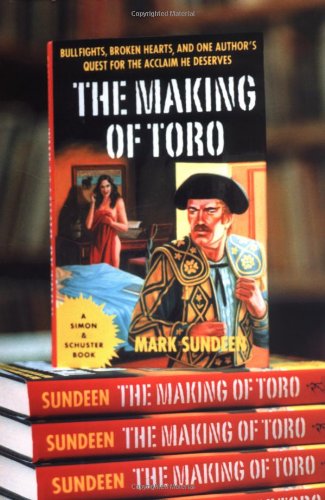 THE MAKING OF TORO: Bullfights, Broken Hearts, and One Author's Quest for the Acclaim He So Richly Deserves

"My art is my life, and versa vice," proclaims Travis LaFrance, Sundeen's ever-confident, fictional alter-ego, in this amusing, chivalric tongue-in-cheek story of a writer set on acquainting everyday readers with Mexican bullfighting. After receiving little recognition for his previous book on falconry (which, as Sundeen explains, "is about birds only insomuch as the falcons serve as a metaphor for my flight toward freedom"), the author attempts to redeem himself by unveiling bullfighting's rugged, fiery ritual. The motivated yanqui (Spanglish for "Yankee") buys a one-way ticket to Mexico City, expecting to fall in love with the tradition of bullfighting, the captivating beauty of Mexican women and the splendor of one of the most acclaimed capitals of the bullfighting world. Instead, he finds grimy buildings, cybercafes and Domino's Pizza–sponsored bullrings, which look more like circuses than a noble institution's holy ground. But Sundeen refuses to come to terms with a deflated dream. With each misguided attempt to find bullfighting's heart and soul, LaFrance uses a quixotic idealism to convert reality (e.g., an undercooked drumstick served in a dingy corner diner) to what could be (an exotic delicacy, served only to the most esteemed of guests). It's a skewed travelogue, in which the line between a gritty reality and a chimerical fantasy is warmly blurred. Photos.