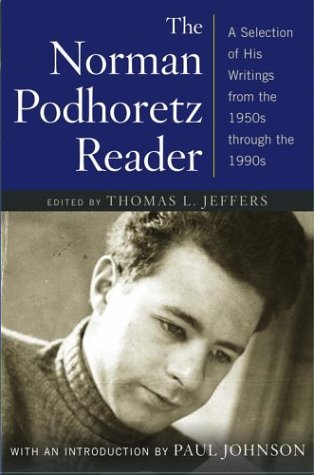 THE NORMAN PODHORETZ READER: A Selection of His Writings from the 1950s Through the 1990s

Norman Podhoretz used to say, "One of the longest journeys in the world is the journey from Brooklyn to Manhattan." Podhoretz's journey to become one of America's most prominent intellectuals is remarkable: from Brownsville, Brooklyn, where he was the son of immigrant Jews, to Columbia University, Cambridge and finally, the editorship of the important intellectual journal . During the past five decades, Podhoretz has produced notable books and essays on a variety of topics including literature, politics, Jewish thought and culture. This reader brings together a collection of these essays and book excerpts, tracking Podhoretz's journey from young literary critic in the '50s ("The Adventures of Saul Bellow") to leading provocative thinker in the '60s ("My Negro Problem—and Ours") to prominent and influential neoconservative in later decades ("From Prologue: A Letter to My Son"). Whether he writes about Saul Bellow, Vietnam or Larry Flynt, Podhoretz produces essays that share a common strand: in addition to their general perspicacity and good writing, they are highly personal. Not only do these essays reflect the ideas of the time in which they were written but they also illustrate how those ideas have affected Podhoretz as a thinking person and as a human being. To confine Podhoretz, as many do, to a political camp is to misunderstand the man and his intellectual journey. While faithful conservatives will certainly appreciate this collection, anyone who is interested in reading or writing about ideas in a way that is meaningful should consider reading at least a sampling of Podhoretz's work.