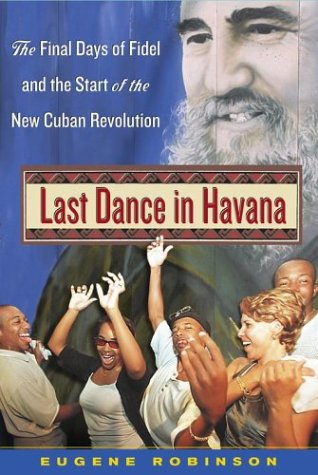 LAST DANCE IN HAVANA: The Final Days of Fidel and the Start of the New Cuban Revolution

The old-time Cuban Buena Vista Social Club may have won riches and international fame with its surprise hit recording and documentary film, but life under Fidel Castro remains a struggle for most of the group's compatriots. This is the story of bands that play in Cuba, hoping to score audiences of foreign tourists or the few Cubans who can cough up a $10 cover charge. This account places life on the island against the backdrop of music, dance and racial politics, and shows how culture is political in Cuba—and for the U.S. officials who control entry visas. Robinson, an assistant managing editor at the , commits two sins common to journalists: an overabundance of taxi drivers' opinions and of accounts of himself taking notes. He also has an annoying tic of referring to the "Carnegie Hall of Cuba," to the "Li'l Bow Wow of Cuba," the "Juilliard of the Caribbean," the "Justin Timberlake of...": you get the picture. But Robinson makes up for that by conveying the energy of, and his passion for, the island, its music and the players. He does an excellent job of recounting how Cuba's hip-hop scene has challenged the regime, getting away with what nobody had until one band finally crossed the line.