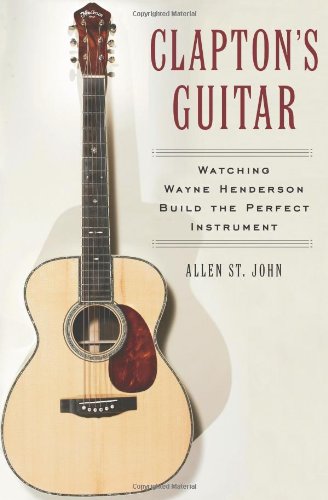 People will go to great lengths to get master craftsman Wayne Henderson to build them an instrument. If you're an award-winning journalist like St. John and you want to expedite the process, you write a book about Henderson that's equal parts travelogue, biography and ode to the old-fashioned trade of making top-notch guitars. Upon learning that Eric Clapton has been on Henderson's waiting list for 10 years, St. John sets out to learn about the little-known man behind the instruments every guitarist knows. He visits Henderson's Virginia home, shadowing the artist while he builds guitars, plays "old time music" concerts and doesn't build Clapton's guitar. Along the way, he finds answers to questions such as which is the best wood for guitar making (Brazilian rosewood) and how much the 1939 Martin guitar Clapton played on was auctioned for ($700,000). When St. John finally helps cajole Henderson into building two guitars for Clapton (one to be auctioned for charity), Henderson's and St. John's expertise shine through. St. John's descriptions of Henderson choosing wood, making a dovetail neck joint or whittling bracings for the guitar-top are as detailed, refined and playful as the instruments Henderson creates. Photos.