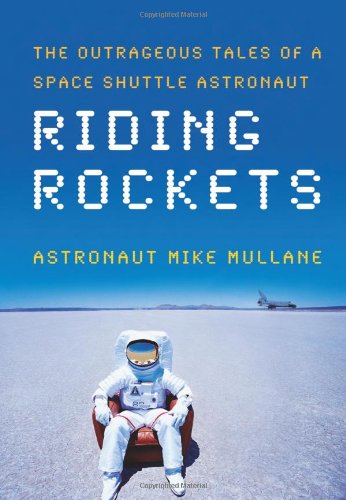 Riding Rockets: The Outrageous Tales of a Space Shuttle Astronaut

With a testosterone-fueled swagger and a keen eye for particulars, Mullane takes readers into the high-intensity, high-stress world of the shuttle astronaut in this rough-hewn yet charming yarn of low-rent antics, bureaucratic insanity and transcendent beauty. Mullane opens this tale face down on a doctor's table awaiting a colorectal exam that will determine his fitness for astronaut training. "I was determined when the NASA proctologist looked up my ass, he would see pipes so dazzling he would ask the nurse to get his sunglasses," he writes, setting the tone for the crude and often hilarious story that follows. Chosen as a trainee in 1978, Mullane, a Vietnam vet, quickly finds himself at odds with the buttoned-up post-Apollo NASA world of scientists, technocrats and civilian astronauts he describes as "tree-huggers, dolphin friendly fish eaters, vegetarians, and subscribers to the " He holds female astronauts in special disregard, though he later grudgingly acknowledges the achievement and heroism of both the civilians and women. The book hits its stride with Mullane's space adventures: a difficult takeoff, the shift into zero gravity, his first view of the Earth from space: "To say the view was overwhelmingly beautiful would be an insult to God."