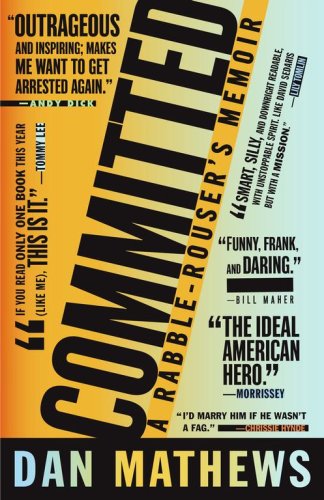 Having grown up poor and gay, with a penchant for punk rock and Lawrence Welk, Mathews, who is now campaign chief for People for the Ethical Treatment of Animals, had a rough start. But his camp, cosmopolitan and crass memoir is like a life lesson from the Island of Misfit Toys: a study of the unwitting heroism and adventures of an outsider dedicated to a cause. Less a treatise than a picaresque tale, his book wouldn't be complete without a bit of persuasion, whether detailing the horrors of the fur industry, factory farming or animal experimentation. But he's as willing to make fun of himself as he is of his many targets—including editor Anna Wintour (who, he says, "looks as if she has constant, painful gas") and deli-meat–hurling Iowan children. Then again, this is a man who dresses up regularly in a carrot costume. Aided by humor, luck and friends like Pamela Anderson and Morrissey, Mathews makes clear there is savvy to his controversial methods. "The flair you bring to a protest is as important as the issues themselves—if you want to reach beyond the small core of whoever might care about an issue." Those at odds with Mathews's ideals are bound to find him irritating, but open-minded readers will discover a charming polemicist.