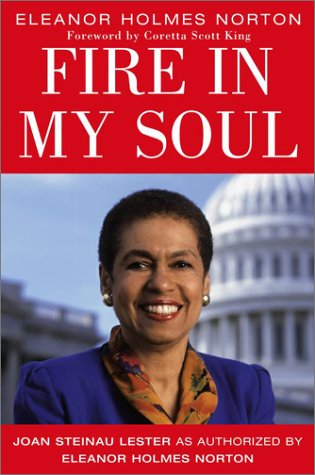 FIRE IN MY SOUL: Joan Steinau Lester in Conversation with Eleanor Holmes Norton

Norton, member of Congress, professor and longtime civil rights activist, lives by the motto "You can't win what you don't fight for." Syndicated op-ed columnist Lester () tells Norton's extraordinary story through extensive interviews with colleagues and friends, but mostly through Norton's own words. Born in 1937 in segregated Washington, D.C., Norton was motivated by the knowledge that her great-grandfather had escaped slavery in Virginia. Smart and intense, Norton recognized early on that education and a strong work ethic were the recipe for success. After graduating from Antioch College (where she was the only black student) and Yale Law School, she became the assistant legal director of the ACLU. In 1970 she became New York City's first woman commissioner of human rights, and her ability to bridge racial and gender gaps made her a success. She went on to become the first woman chair of the federal Equal Employment Opportunity Commission. Norton has always seen obstacles as opportunities, and her civil rights crusades have become legendary, from helping organize the Free South Africa campaign to marching on Congress to get a hearing for Anita Hill. In 1990, she began her long career as congresswoman from Washington, D.C.—a post she still holds. A self-professed workaholic, Norton knows her demeanor and drive have endeared her to some and estranged her from others. Steinau's thorough portrait is a compelling and inspiring homage to a legacy still in progress.