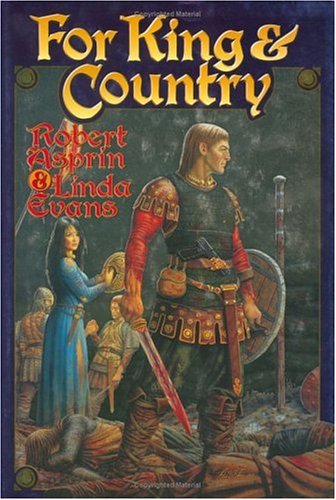 FOR KING AND COUNTRY

At the start of this fast-paced, historically informed time-travel thriller from Asprin and Evans (, etc.), SAS Captain Trevor Stirling is convalescing after a ghastly bombing in Belfast. But he is not through with Ireland. A suspected IRA agent, Dr. Brenna McEgan, is supposed to have infiltrated a time-travel laboratory. When McEgan and Australian scientist Cedric Banning disappear into the past, Stirling has no choice but to follow. He ends up sharing the consciousness of a noted warrior of King Arthur's court, one Ancelotis (Lancelot, perhaps?), while unknown to him, McEgan is hosted by Morgana, Arthur's stepsister. Mutually suspicious, the two time-traveling minds try to hide from each other, leaving Banning in his guise as the bumbling minstrel Lailokan to get on with his plans. Banning is the real villain, a fanatical Protestant Ulsterman determined to avenge the present-day abandonment of Ulster by the English. Presenting barriers to victory or even survival are court intrigues; a promiscuous and inept Guinevere (here named Ganhumara); a young Mordred (Medraut), who slowly assumes virtue and even nobility; a Merlin (Emrys Myriddin), who thinks too often with his private parts; plus formidable Saxons, Picts and Irish of all stripes. Extraordinary action scenes balance the many expository lumps. In the end, readers will cheer on the heroes as they strive to save a king, a country and possibly even a future of peace between England and Ireland.