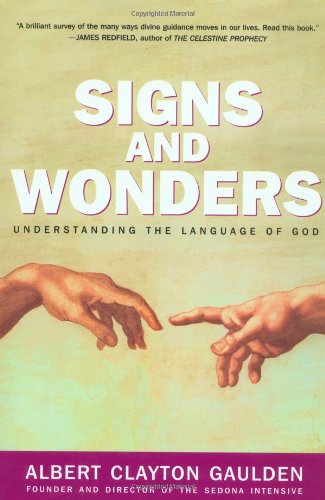 SIGNS AND WONDERS: Understanding the Language of God

The core message of this book is a simple and valuable one: if we make ourselves receptive and stop to listen, we will find that God speaks to us in a variety of ways. Unfortunately, Gaulden, founder and director of the Sedona Intensive (a treatment center for people struggling with compulsions and addictions), takes almost 300 pages to belabor what could have been said in about a third the space. He calls these non-verbal communications from God "the new language" (although what is "new" about it is unclear, since he claims that Noah and Moses understood it), and lists 25 examples from angel murmurs and coincidence to intuition and visions. Each definition is accompanied by real-life examples gathered from Gaulden's clients over the years. The stories are often the most engaging parts of the book, but they can also be the most confusing. For example, although Gaulden manages to formally define the subtle differences between "coincidence," "serendipity" and "synchronicity," or between "hunch," "intuition," "inner knowing" and "thought impression," his narrative illustrations seem to blur the terms together. The final third of the book purports to improve readers' reception of the new language, but reads like a self-help manual bogged down in lists and bullet points. It is also full of oblique advertising for Gaulden's Sedona program. Gaulden's thesis may help many readers increase their spiritual sensitivity, but the book has a high chaff-to-wheat ratio along the way.