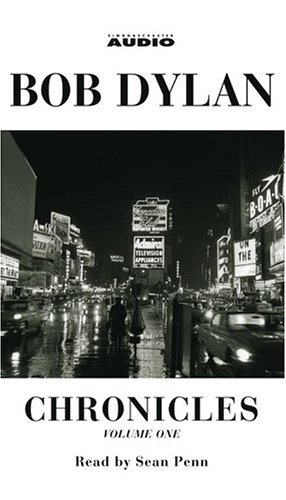 For legions of die-hard fans and Dylanologists, there is but one voice. And hearing it spoken is rare, mainly during concert band introductions. So the sound of actor Penn taking on Bob Dylan's legendary and oft-cryptic persona is, initially, a surreal aural experience. But after awhile, it becomes clear that the choice was apt. Like Dylan, Penn is a fearless performer, and his own iconoclastic personality serves the narrative without ever threatening to upstage it. One detects a reverent restraint in Penn's voice that conveys the impression that his casual performance is likely as studied as his acclaimed screen work. He adopts a subtle Guthrie-esque workingman's tone, peppering his delivery with plenty of conjunctions. Only when recounting Dylan's youthful arrival in New York City does Penn's preternatural, been-there-done-that tone seem inappropriate. Not surprisingly, Dylan's prose style is lyrical and rambling, the rhythm and cadences jazz-like, and the content prone to Beat influences. But Penn handles these charges with skill. His delivery is even, but his voice dips and rises with welcome emotion when Dylan discusses his unwanted anointment as the conscience of a generation. Overall, this is a solid and compelling audio adaptation.