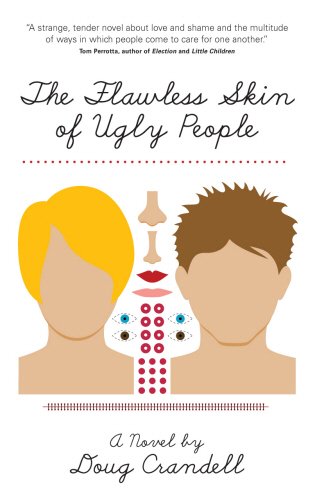 The Flawless Skin of Ugly People

Hobbie, the narrator of this endearing debut novel, prefers the company of his beloved mutt, Terry, to the companionship of most humans. Hobbie, who has a blistering case of chronic acne, and Kari, his obese girlfriend of 20 years, continually aggravate their situations: Hobbie picks at and further inflames his bad skin while Kari eats in response to a shared tragedy from their youth. When the novel opens, Kari’s ensconced at a weight-loss clinic hundreds of miles from their temporary north Georgia home, and Hobbie lives like a hermit until he’s attacked by a bear. While recovering, he’s sucked into the messy world of Kari’s father, Roth, and slowly, clumsily becomes part of Roth’s family once Kari goes missing from the clinic. Crandell has an exquisite eye for small details—Kari’s letters home are written on “lined paper, the same kind we wrote love notes on”—that lend a tender feel to what could easily be overwrought. Though the novel turns on some unconvincing plot twists (particularly in the concluding section), the characters and situations are so simultaneously moving and unique that a bit of contrivance doesn’t sink this tale of misfit love.