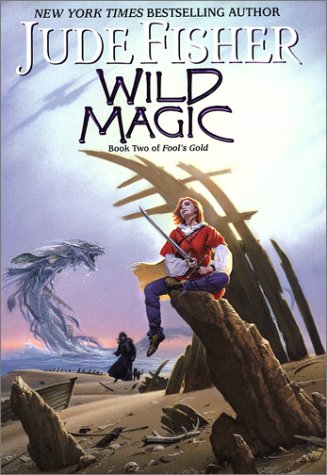 Banished centuries before with the imprisonment of the gods, the magic continues to return, slowly, to the land of Elda in Fisher's densely plotted sequel to (2002). Juggling six major plot lines, the book covers the landscape of Elda from frozen north to volcanic south. In between, the seafaring Eyran islanders try to keep their Viking-like culture from falling under the domination of the more populous, Italianate Kingdom of Istria. Katla Aransen, swordmaker and daughter to Aran Aranson, lord of Rockfall, finds that her ability to commune with the earth forces her to accept a destiny not of her own choosing. Her father, less blessed, tries to make his fortune in an ill-fated expedition to the far north. Meanwhile, avatars of the captive gods move toward the center of the brewing war between Eyra and Istria. In addition to the large and somewhat unwieldy cast, with multiple links among them, Fisher fills the book with historical asides, myths, songs and folklore. But even if certain problems remain unresolved, the plot does advance. Noticeably, characters react according to their cultural backgrounds, providing the kingdoms and peoples with some sense of individuality. Nor are the obvious heroes or villains without both flaws and virtues. If the whole seems too close to romanticized history, it compensates with engaging details and strong female characters.