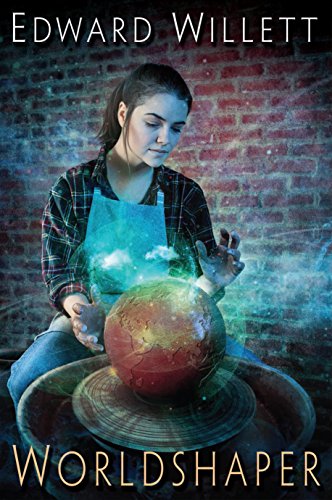 This rollicking secondary-world contemporary fantasy opens with a bang. Karl, a portal traveler, bursts into a world where he doesn’t know anyone or anything except that he must find the world’s creator, Shawna. She’s just opened a pottery studio and has no idea that she created the world she’s in, until she unknowingly turns back time to save her own life from a man called the Adversary. He steals part of Shawna’s shaping ability and forces her and Karl to go on the run and find a new way into the next world, learning more about her powers on a cross-country road trip. They grapple with the ethics of changing the world, the question of what makes people “real” when the worldshapers can change everything about them with nothing more than a thought, and the need to save the universe. Willett (I Tumble Through the Diamond Dust) meticulously includes small details that make the constantly changing scenery feel solid and real, such as Shawna’s hometown being the apple-growing capital of the country. This novel sets up a fascinating, fluctuating universe with plenty of room for growth for the main characters, and readers will eagerly join their journey. [em]Agent: Ethan Ellenberg, Ethan Ellenberg Literary. (Sept.) [/em]