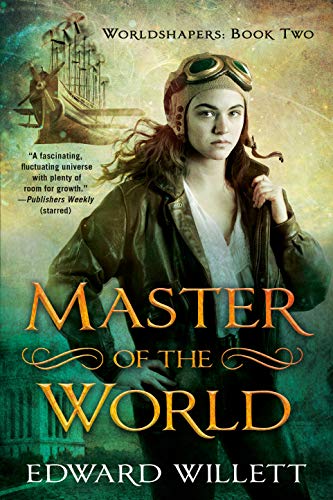 Master of the World (Worldshapers #2)

In 2018’s Worldshaper, Shawna Keys discovered that she was a Shaper, capable of manipulating entire worlds to suit her will, and that the Earth she knew was a product of her power. Pursued by a mysterious Adversary, she fled her home. This lively, action-packed follow-up sees her trapped in a world inspired by the works of Jules Verne, one where Prince Dakkar, also known as Captain Nemo, wages a rebellion against the airborne Robur, so-called Master of the World. In order to protect reality from the Adversary, Shawna must find the Shaper controlling this Earth, acquire his power, and seal the portals between realities. As a stranger in a strange, steampunk land, Shawna relies on her wits and does whatever it takes to survive, even if that means betraying her newfound friends and allies. Willett takes full advantage of the fanciful premise to deliver a fun setting populated by fantastic vehicles, mysterious islands, and heroic and villainous characters, all drawn from classic literature. In this larger-than-life arena, Shawna is often out of her depth, a heroine slowly coming into her power and responsibilities who struggles with the weight and consequences of her actions. This installment relies heavily on the first, but returning fans will find it contains thrills aplenty. Agent: Ethan Ellenberg, Ethan Ellenberg Literary. (Sept.)
close
Details