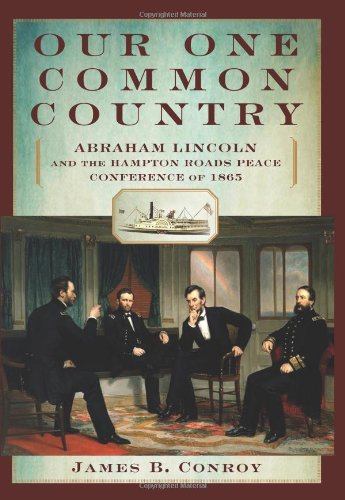 Our One Common Country: Abraham Lincoln and the Hampton Roads Peace Conference of 1865

In early February 1865, in the midst of the Civil War, a group of Southern and Northern politicians—including President Lincoln—met at Hampton Roads, Va., to negotiate peace between the two warring factions, however skeptically. Plans centered on a proposal to overcome their differences by invading Mexico together, and throughout the peacemaking attempts, the politicians sought secrecy (often in vain) because of strong disapproval from the media and certain peers. Needless to say, the peace conference was a failure. Conroy’s impressively thorough and engaging document details the events leading up to, during, and immediately after the Hampton Roads Peace Conference, which has never before been the sole subject of a book. The book illuminates the conflicting, passionate views on the Civil War—and on the appropriate way to end the war—while giving fascinating insight into the war’s major players: Lincoln and his secretary of state, William H. Seward; Confederate president Jefferson Davis and his vice president, Alexander Stephens; the Blair family of Washington power brokers; and generals Grant, Meade, Lee, and Longstreet. Conroy draws on private journals, official notes, newspaper reports, and more as he untangles this important, but often overlooked, moment in history. (Jan)
close
Details